“The Old Now” by Michael Bazzett 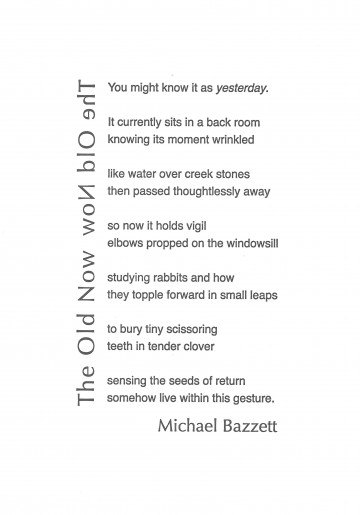 Michael Bazzett’s poems have appeared in West Branch, Beloit Poetry Journal, Best New Poets, Green Mountains Review, DIAGRAM, and Guernica, among others, and his work was recently nominated for a Pushcart Prize. He was the winner of the 2008 Bechtel Prize from Teachers & Writers Collaborative, and new poems are forthcoming in Carolina Quarterly, Pleiades, Smartish Pace and The Literary Review. He lives in Minneapolis with his wife and two children.

Imagine all the moments of your past (both those you’d love to relive and those you’d rather forget) intent on happening again. They haven’t really “passed thoughtlessly away” at all. They’re just “in a back room… hold[ing] vigil/ elbows propped on the windowsill” looking for a way into the present moment. They might take the form of a memory or a dream, or maybe just a vague feeling that the same things happen over and over. Bazzett’s speaker is haunted by it all, but gently so: the poem’s closing image of rabbits munching clover is all springtime possibility, and isn’t that why we hold our memories so close? It’s hard to know which has the stronger pull, the possibility of renewed happiness or the chance to set a wrong to right.

For a poem that addresses the transition between moments, the typefaces needed to be similar enough to suggest a continuum but at the same time distinctly different. Helvetica is a classic modern sans serif – ubiquitous in public signage, helping people get from here to there – but somehow timeless. Optima is ever so slightly serifed, more distinctive but less famous, a first cousin.

Using digital design to create printers plates allowed me to reverse the type of the title for a true mirror effect – something that’s impossible with lead type. It seemed appropriate for a poem that loops back on itself “sensing [its own] seeds of return.”

Filed under: Nature, Time and Memory