“The Moth” by Michael Hettich 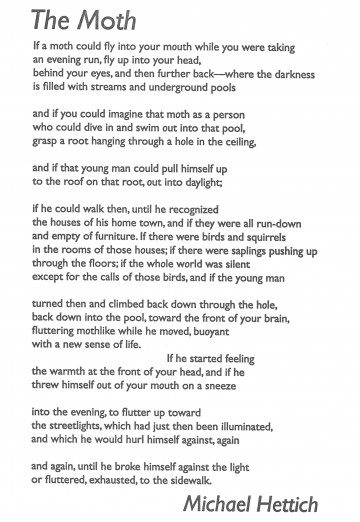 Michael Hettich has published a dozen chapbooks and books over the years, most recently The Animals Beyond Us (New Rivers Press, 2011) and Like Happiness (Anhinga Press, 2010). His most recent chapbook, The Measured Breathing, won the 2011 Swan Scythe Press Chapbook contest. His poems have appeared widely in journals and anthologies. He lives in Miami and teaches at Miami Dade College. His website is michaelhettich.com.

This poem offers a kind of Mad Hatter’s trip down memory lane, which is to say, there is no room for nostalgia and the pace is way faster than a stroll. In place of a white rabbit we follow a moth and then a young man back into the recesses of our own heads, where our memories are at once familiar and changed. But the poet doesn’t let us linger there – he turns the young man around, sends him right back out into the present, “buoyant/ with a new sense of life.” The insistent “ifs” continue, piling up into an irresistible urgency to keep the man/moth moving until he either injures himself or collapses in exhaustion. It’s the kind of feeling you might get “toward the end of an evening run,” the end of the work week, the end of your
working life…

Long poems require a typeface that lets the reader’s eye slide along the page, unobstructed. But this is also a fanciful poem, so there needed to be a bit of whimsy as well. Gill Sands is all of that: highly legible yet the lower case g is the epitome of squiggle. The right half of the lower case k doesn’t quite meet its vertical stroke and the lower case f and l refuse to combine into a ligature (as they do in, for example, Futura). When you tell a friend a fanciful story, their eyes might widen, their mouths might open into a silent O – and so this poem has substituted Os in key words, as if it cannot quite believe its own story.