“Laurels In September” by Kejt Walsh 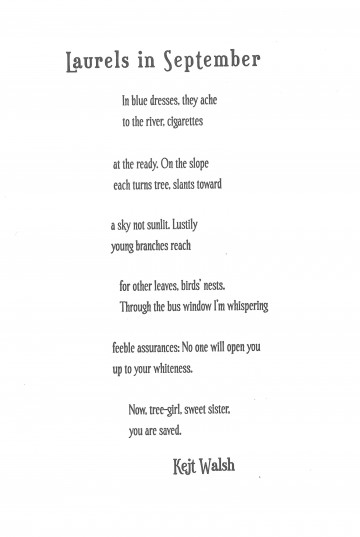 Kejt Walsh emerged, dew-eyed, from Iowa’s capitol city and has been splitting time between East and West Coast haunts ever since. Kejt likes drinking chai with non-dairy milk, petting large dogs, and walking in the rain. Kejt’s poetry has been featured in GOUIE and Bluestem, and an essay entitled “Why I Write” appeared in Broad! a gentlelady’s magazine. Kejt is currently completing a philosophy degree in Eugene, OR, and looks forward to a life characterized by the constant presence of books.

Have you ever wanted to escape so badly that you wished you could transform yourself, become unrecognizable? It’s a story that reaches back to Apollo and Daphne, but Kejt Walsh gives it an uneasy, modern twist. Her speaker identifies with all the would-be Daphnes who “each turn tree,” calling one “sweet sister.” Her descriptions of these “tree-girls” betray her own longing to transform, to “reach/ for other leaves, birds’ nests.” But she can’t quite forget that trees get cut down for all kinds of arbitrary reasons. It’s this knowledge that undercuts the last line; in such a world, no one is “saved” and the speaker knows her “feeble assurances” to the contrary aren’t enough. Safety is, at best, temporary, no matter how much the speaker longs for it, no matter how hard she tries to reassure herself of the contrary.

Trees as women, women as trees – it was probably an old association even in antiquity, so it’s no coincidence that we call tree branches “limbs.” The typeface therefore needed to have a similar reaching quality without becoming illegible. Echelon’s diagonals arc off the vertical stems (see the capital N) and in letters like the lower case w, create a swaying effect. Euphorigenic is similarly organic, the way the capitals and the lower case t descend, how its heavy serifs root it to the baseline, the tendrils of the capital S and lower case j.