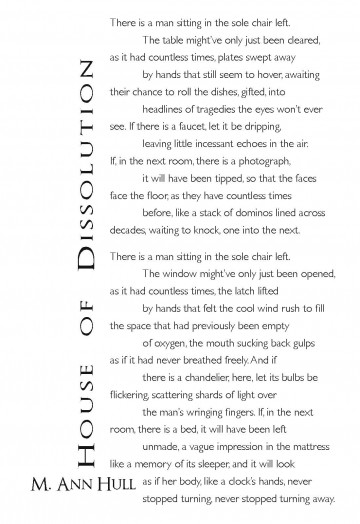 M. Ann Hull has published work in 32 Poems, Barrow Street, BOXCAR Poetry Review, Fugue, Mid-American Review, Passages North, and Quarterly West, among others, and has been awarded the Academy of American Poets Prize. A former poetry editor of Black Warrior Review, she holds an MFA from the University of Alabama.

What is certain: “There is a man sitting in the sole chair left.” All the rest is conjecture, the string of “If… then let it be…” statements working like an incantation to create a story around him. This is the magic of storytelling and the trap of cliché in one glorious bundle. Of course the photograph will be tipped over in the universal sign of anger and pain. Of course the dripping water echoes through the scene and the chandelier bulbs flicker: The subject of this story is abandonment, and through these cues, we know the story without actually knowing it. If the poet had named names, had told us the man’s name was Bob, we’d think him boring, his life a cliché. Instead, he’s without identity. The effect is like “a vague impression in the mattress,” where a feeling, an atmosphere, persists long after the events that created it.

A poem so full of conjecture calls for a light touch. The thin, even strokes of Gill Sans leave so much white space that the letters seem to float in place. Like the images in the poem, they are both present and not quite. Movement comes instead from the alternately indented lines, a visual call and response to mirror the myriad variations on “if… [then] let it be.” Optimus Princeps offers a little bit more weight and contrast in its letterforms, so the title holds together even as it stretches out over the length of the poem.

Filed under: Manifestos and Strong Voices, Time and Memory