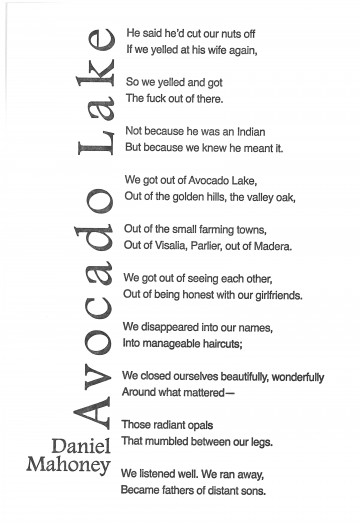 Lately, Daniel Mahoney has been writing music reviews for bands and albums that do not exist, or exist only in his head. Look for them under your boot soles. You can find him physically in Maine and virtually at http://rusticatordeluxe.wordpress.com/

It’s appropriate “Those radiant opals/ That mumbled between our legs” don’t show up until the penultimate couplet. They’re the root of the speaker’s masculinity, the thing he’s driven to protect and that drives him to run long after the Indian and Avocado Lake are history. In fact, they propel the speaker through a whole catalogue of abandonment that on a first read seems headed toward regret. But that poem has been written before. That ending would read, “We listened too well,” implying a sense of loss, especially for “distant sons.” Instead Mahoney surprises with the speaker’s unapologetic allegiance to his opals – “We listened well.”– and underscores their power by keeping his speaker performing their imperative: “We ran away,/ Became fathers of distant sons.”

Place anchors this poem so the title needed to anchor the design. The last lines of the body slip just a little lower, like the speaker slipping out of town but never really growing beyond the behaviors learned there. The thin strokes of the o in Footlight are off center so the letterform looks like it’s about to roll away. For the story itself the typeface needed to echo the unvarnished clarity of hindsight. Helvetica tells it like it is without getting in the way.

Filed under: Relationships, Time and Memory