“After After Sappho” by Maggie Colvett 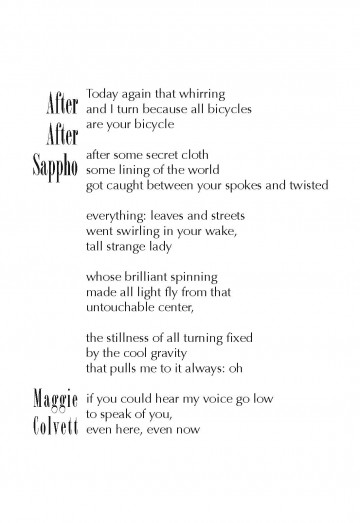 Maggie Colvett is an M.A. candidate at the University of Georgia. She served as 2014 editor of The Mockingbird, the arts and literature magazine of East Tennessee State University. A collection of her poems entitled The World by Memory and Conjecture was awarded ETSU’s Undergraduate Honors Thesis Prize in the Humanities for outstanding work in any area of the humanities. Her poems have appeared in Hayden’s Ferry Review, Cumberland River Review, and Still: The Journal. She lives in Athens, GA and Piney Flats, TN, where her family keeps many dozens of chickens.

“All bicycles/ are your bicycle.” Isn’t that the essence of falling in love? Before, bicycles didn’t even register. Afterward, they are everywhere. And it’s that division, that mark in time that Maggie Colvett understands so well. All other events of life are re-ordered in relation to this one, seminal event and the everyday objects associated with it take on new significance. That’s true of encountering new ideas and writers, too. Images and turns of phrase take up residence in our minds and leave us “swirling in [their] wake.” It needn’t even be a whole poem. It could be a snippet of something from antiquity, something by Sappho, say, that renders all else capital A “After After.”

Sappho is ancient and mysterious – we have just fragments of her work – but she’s also very much alive because her concerns remain current. The typeface for the body of a poem that invokes her therefore had to be timeless but also a little mysterious. Optima provides a clean, modern silhouette but is it seriffed or sans? That depends on whom you ask. Bordeaux Roman provides a flourish to the ragged edge of a layout patterned after ripped notebook paper. The pair of lower case g’s in the poet’s name could be the wheels of a bicycle; those striking capital a’s could be the bicycle’s rider, spine leaning slightly forward on her long arms.

Filed under: Longing and Restlessness, Manifestos and Strong Voices, Relationships