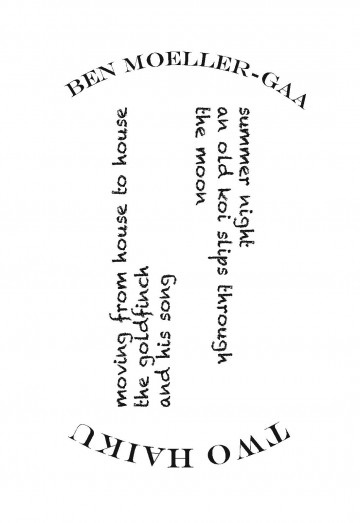 Ben Moeller-Gaa is the author of two haiku chapbooks, Wasp Shadows (Folded Word Press 2014) and Blowing on a Hot Soup Spoon (poor metaphor 2014). His haiku, essays and book reviews have appeared in over 25 journals worldwide including Acorn, Modern Haiku, A Hundred Gourds, Frogpond, Shamrock and World Haiku Review as well as in several anthologies such as Haiku 21, the Red Moon Press’s yearly “Best of English Language Haiku” anthologies (2011, 2012, 2013) and The Haiku Foundation’s Mobile Haiku App.

When Matsuo Basho wrote, “Even in Kyoto/ hearing the cuckoo’s cry/ I long for Kyoto” (tr. Robert Haas) he was both celebrating his present moment and mourning it as it passed. Ben Moeller-Gaa celebrates two such moments: the moon’s reflection on the water is the essence of a calm summer’s evening; the flight of the goldfinch is the energy of spring. Like the cuckoos that sing in Kyoto every year, the koi and the goldfinch have a fleeting beauty all their own. They can be revisited, but each new encounter will differ from our memory – what has become an idea about summer evenings or spring – and remind us that nothing stays the same.

These two haiku are at once the same and opposite. Rather than reflect their differences with separate typefaces, Chalkduster, with its airy, brush like strokes, represents their common feature: impermanence. All moments pass; all chalkboards and sidewalks get washed clean. The mirror arrangement requires the reader to choose a dominant point of view even as the other remains in sight. Setting the title and poet’s name on a circle make this a coin to be tossed.