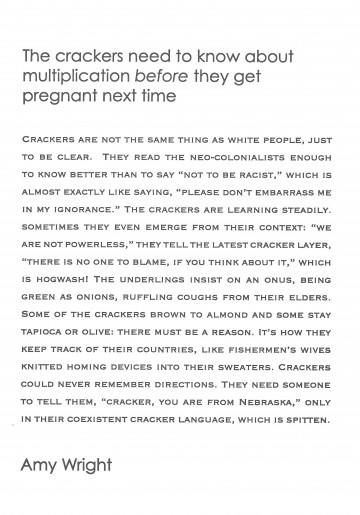 Amy Wright is a 2012 fellow of the Kenyon Review Writers Workshop, the Nonfiction Editor of Zone 3 Press and Zone 3 journal, as well as the author of three chapbooks—Farm, There Are No New Ways To Kill A Man, and The Garden Will Give You A Fat Lip, which won the 2012 Pavement Saw Chapbook Contest.

“Just to be clear” a poem’s speaker can have a very different agenda than the poem itself. Amy Wright uses that to good effect against one of the uglier bits of human nature: our need to judge each other’s differences. Her speaker starts off well enough, able to see through phrases like “not to be racist” and to understand how stereotypes erase nuance. (The term “cracker” originally referred to slave drivers who were mostly white but not exclusively so.) But the repeated use of the word “cracker” quickly slips it back into stereotype, which is where the poem’s agenda diverges from the speaker’s. What’s heartbreaking is that the speaker doesn’t seem to realize what’s happening, that with every “they keep track” or “they need someone” she distances the group she’s describing until they’re merely “coexistent,” lacking any common ground. So while the speaker pigeonholes a group into a stereotype, the poem seeks to expose how insidious those racial stereotypes are. It’s a disturbing poem because we have so far yet to go.

Copperplate’s small caps read like a shout and reinforce the poem’s indignant tone. It’s letters are blocky, too, each of them a tiny version of the large block of text that is this poem’s body. It’s a visual brick, heavy, like the subject matter. The length of the title required a typeface that had open bowls similar to Copperplate, but lighter; Century Gothic strikes that balance.