“she tames the small things that consume us” by Dan Sicoli 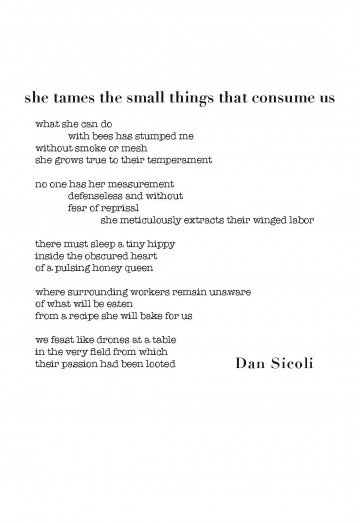 Dan Sicoli, of Niagara Falls, NY, writes about hope and the fallout that comes from offering it up. He is the author of two poetry chapbooks from Pudding House Publications (Columbus, Ohio), Pagan Supper and the allegories. In addition to co-founding and co-editing the literary press and magazine Slipstream (www.slipstreampress.org), his work has appeared in numerous litmags, e-zines, anthologies, and poetry audio recordings including Chiron Review, ONTHEBUS, Quercus Review, Bop Dead City, Barbaric Yawp, Dog River Review, Bathtub Gin, 2River, Rock Salt Plum, Stirring, Up the Staircase, and Nerve Cowboy. He has been twice nominated for the Pushcart Prize. Currently, he can be found in local dives, saloons and barrelhouses banging on an old Gibson 335 as a rhythm guitarist with an area rock’n’roll band. In late summers, he oven dries home-grown plum tomatoes.

Enchantment is still possible in the modern world. What else can explain this woman’s gift? How else to describe this poem’s effect? Not just on the bees and the speaker, but on the reader, too. Is it the idea of being tamed? That it might be possible for another person to calm the wild, buzzing chaos of our inner and outer lives? What a good feeling it is to be fed, to sit in a field knowing the bees won’t sting, to let someone else sort out the details that would consume our time and energy. As long as “no one has her measurement” she’ll stay a source of wonder.

Bees are rounded creatures with curvaceous flight patterns. Their wings make little clouds around their bodies… so the typeface also needed to be rounded, but with the flourish of a serif to suggest the tendrils of plants the bees service. Didot fits the bill perfectly, as does American Typewriter, chosen for its throwback to a less electronic time. The nuts and bolts of beekeeping haven’t changed all that much – and you still have to develop a knack for it as you would an old typewriter with a sticky key or two.