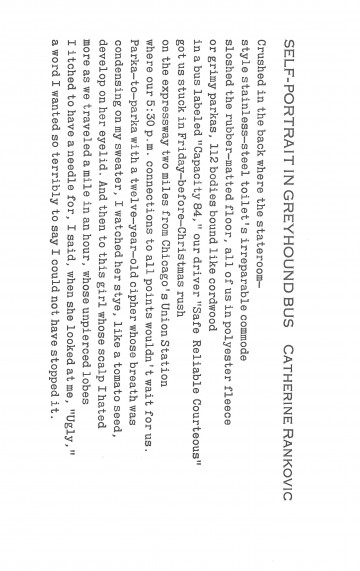 Catherine Rankovic is the author of Meet Me: Writers in St. Louis (2010), Island Universe: Essays and Entertainments (2007), and Fierce Consent and Other Poems (2005). A Pushcart Prize nominee and winner of first-place poetry awards in 2009 and 2010, she has published poems in Boulevard, River Styx, Gulf Coast, Natural Bridge, 13th Moon and other journals, and online in Umbrella and The St. Louis Beacon. She has taught university creative writing courses since 1989 and is a mentor and editor for new authors at BookEval.com. She has an M.A. from Syracuse University and an M.F.A. from Washington University.

We’ve all been this grumpy traveler: over-hot, overtired and lugging baggage that’s as heavy as this poem’s long, long lines. But in that exasperated moment it’s hard to grasp one’s own contribution to the unpleasant atmosphere. That’s when William Wordsworth’s idea of poetry as “emotion recollected in tranquility” is most useful. It’s only afterward, when we’ve disembarked from the bus, after we’ve finished the poem – that word “Ugly” right at the end, sticking with us as we return to the title – that we make the necessary connection.

What is it about bus stations? Even when they’re new and clean, they feel like places time has mostly forgotten. The typewriter is an object suffering a similar fate, hence my choice to use Courier for the body of this poem; it suggests a level of frugality that leads to anachronism. For the titles, 12 point Copperplate offers a blocky complement to Courier, and is itself out of time. It’s so far out of favor with fine print makers that its use here will certainly induce some cringes. That’s exactly right for such an unflattering, honest, Ugly self-portrait as this one.