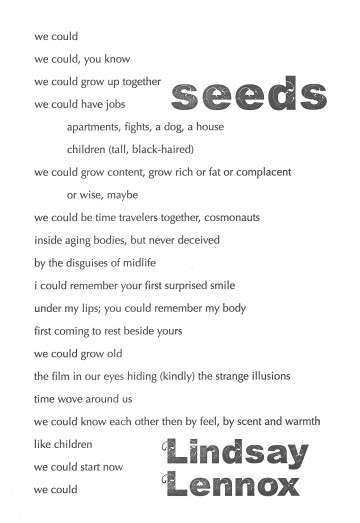 Lindsay Lennox is a writer living in Denver, Colorado. She writes fiction, non-fiction and poetry on good days, and punk rock song lyrics on bad ones. She’s working on a novel about identity, heroes and rock & roll. Her work has appeared in Flashquake, Thought Catalog, thickjam, the Monarch Review, Underground Voices and elsewhere. www.lindsaylennox.com

Perhaps it’s the invitation at the end; perhaps it’s the sweetly self-conscious “you know” in the second line, or maybe this poem’s appeal lies in how round it is. It’s more than just the last “we could” clasping the end to the beginning; each instance along the way functions like a bead on a rosary, one round little prayer after another, each with a wish for a different kind of growth, a new entrance to intimacy with the other half of “we.” The speaker’s hope is so palpable, so sincere, that when she says “we could start now/ we could” her hope becomes yours, and you feel renewed.

Orial, with its inscribed vines and suggestion of buds, draws the eye. All those intricate lines, swirling against the thick black letterforms, are an obvious corollary to the title and its hoped for growth. What requires a closer look is how those vines create figure and ground, how they divide up the letterforms into pieces at once separate from and indispensable to the whole. It complements Optima’s ever-so-subtle flare – a seeming wish for serifs – by letting its vines occasionally escape their boundaries.