“Prairie Queen of the Jackalopes” by Don Raymond, Jr. 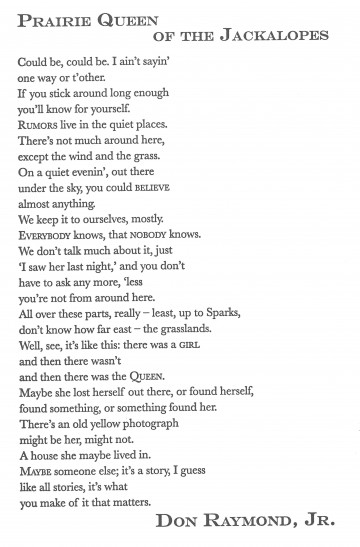 Don Raymond, Jr. lives in San Jose, CA, where he runs an Egyptology Museum, a fact which never fails to surprise and delight him. In what little spare time that leaves, he tutors math and science, and serves as mediator in the Machiavellian feline politics of his household. His work has appeared in Poetalk and An Electric Tragedy. He also once didn’t make a left turn at Albuquerque.

A title like this one puts readers on notice – this poem does not take such stories seriously. Or does it? Humor is a powerful tool when you want to express something True; it’s a form of “slant,” as in Tell all the Truth but tell it Slant—/ …The Truth must dazzle gradually/ Or every man be blind—. Emily Dickinson hardly ever left her room but she knew the same thing Don Raymond knows: people don’t like to be challenged about what they believe. We don’t like to acknowledge the amount of subjectivity built into our own world view. Then we get out into a wide open space like the Nevada grasslands and our minds start to wander, we see or hear things we can’t reconcile with how we believe the world works. In fact, when you’re alone, out there/ under the sky, you could believe/ almost anything. That’s being human, and that’s True.

The poem references Sparks, Nevada and the steppes that surround it. It’s a land where horses still run wild and the mythic American West is palpable. The typefaces therefore had to pay homage to the past, or more importantly to our idea of that past. Engravers Gothic works with the select words in Baskerville small caps to suggest an old time advertisement poster.

Filed under: Humor and Joy, Manifestos and Strong Voices