“On the Fifth Level” by Niki Nymark 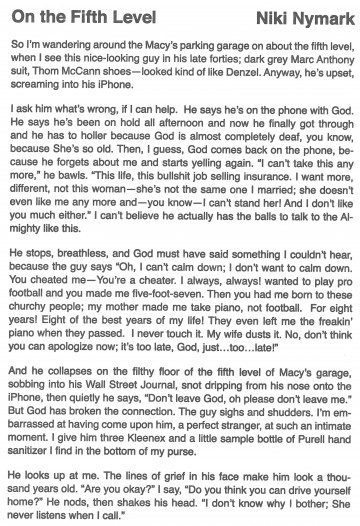 Niki Nymark’s work appears in local, national and international journals, magazines and anthologies. Her chapbooks include Kavannot, Nothing Smaller Than Your Elbow and A Stranger Here Myself. She is a member of the Loosely Identified Poets Society, a women’s writing collective.

Microfiction or prose poem? It’s kind of like trying to differentiate between identical twins: even their mothers can be fooled. What’s known: from Fiction, the children inherited a crisp narrative arc; from Poetry, they inherited compression. In this piece there’s plenty of dialogue and a clear scene, all familiar territory. But it’s the compression that makes it really work. We get just a peek at what turns out to be an essential moment in someone’s life, a glimpse so short that the scene doesn’t so much conclude as build to a punch line. Without a denouement, there’s room at the end for silence, for the reader’s emotions to surface without further interference from the poet. At first you chuckle at how blind the man is to the magnitude of talking to God, and then it hits you: how many times have you said that last line? How many times have you wished someone listened to you better?

The man described in this poem is hungry for a sign that God is not completely indifferent to him, but he fails to recognize his phone connection as that sign. It’s a perfect match for Helvetica, now so ubiquitously used in public signage that it’s easy to miss. You have to learn to recognize it, but once you do, it’s everywhere.