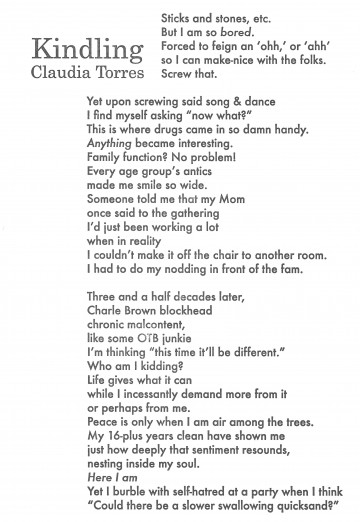 Claudia Torres is at home in the woods of Western New York where she walks daily in the park with her dogs. In a former life, she was the creator and host of the public access television show Truckstop Intellectuals, which showcased local artists and writers. This is her second Architrave poem.

“Yet upon screwing said song and dance/ I find myself asking “now what?”” Indeed. It’s fine to escape, even fun, but sooner or later it falls flat as a strategy for living. This speaker’s preferred method is chemical but it could just as easily have been food, shopping, sex, travel, fight club… Torres’ speaker knows that these are, at best, temporary relief from the deep dissatisfactions inherent to being alive, which is why the end of this poem rings true. Unhappy at yet another family function, the speaker acknowledges that everything that drove her to drugs still exists, as does the desire to escape again. We can only hope to keep it in check while “Life gives what it can.”

A straight shooting poem needs a sturdy typeface that nonetheless has a bit of style. Futura is somehow mostly straight but slightly rounded, evenly weighted but overall a light presence on the page. How else to convey the poem’s struggle? Century provides just enough curl to give the title and poet’s name the attention they deserve.