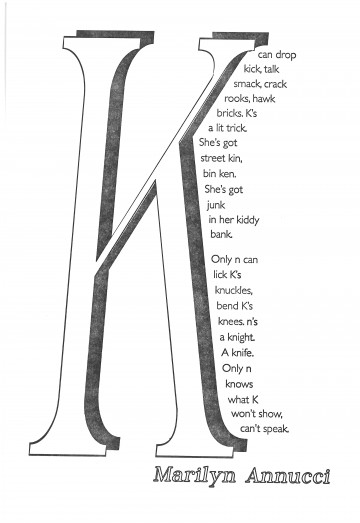 Marilyn’s poems have appeared in a variety of magazines online and in print, and three are forthcoming in Echolocations, Poets Map Madison, from Cow Feather Press (available Fall 2013). She is the author of Waiting Room, which won the 2012 Sunken Garden Poetry Award, selected by Tony Hoagland (Hill-Stead Museum, 2012) and Luck (Parallel Press, 2000). She hopes that her manuscript The Private Lives of Letters (of which “K” is a part) will one day be a book. For more info on Marilyn and her work, go to http://www.madpoetry.org/madpoets/annuccim.html

K may be the title character, but this poem is really about her relationship with n. The rules are clear: K leads with her “drop/ kick,” starts or ends any word in which she appears with a good crack. Unless n follows behind her, carrying the power of K’s own secrets. In that case n – shorter, rounder, dull – does the talking. What we readers can never know, looking in from the outside, is whether n’s knowledge of K holds her hostage or lightens her burden. Does she “talk/ smack” and stash “junk/ in her kiddy/ bank” because she likes to, or because she feels angry and trapped? “Only n/ knows/ what K/ won’t show,/ can’t speak.”

K is quite a character. She lives large and casts a shadow. Phosphorus Dihydride sports a shadow plus fine outlines, because K is also vulnerable (if only to n). For the body of her no-nonsense portrait, K needed a sans serif typeface of the same weight as her outline. Gil Sans slides nicely along her side, an entourage of letters without shadows, following K’s every move.