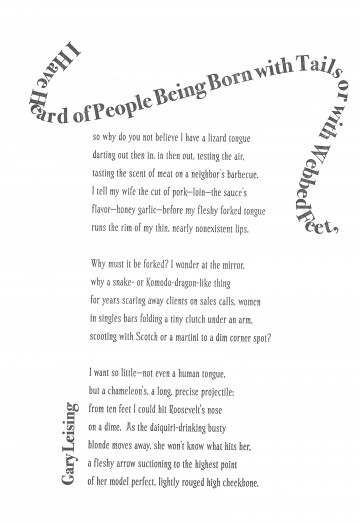 Gary Leising’s book of poems, The Alp at the End of My Street, will be published by Brick Road Poetry Press in 2014, and he is the author of two chapbooks of poems, Fastened to a Dying Animal, published by Pudding House Press, and Temple of Bones, forthcoming from Finishing Line Press. His work has appeared in many literary journals, including River Styx, Cincinnati Review, Prairie Schooner, Sentence: A Journal of Prose Poetics, and Vestal Review. He teaches creative writing and poetry classes at Utica College in upstate New York, where he lives with his wife, Melinda, and two sons, Jude and Ewan.

Who among us hasn’t wished some part of ourselves away, or at least wished it was better than its current form? There’s the rub: what exactly is “better?” And that’s what makes this poem interesting: “better” for this speaker doesn’t mean being more like other humans, to fit in; instead he wants to retain his eccentricity, just in slightly different form. Not because he’s desirous of companionship – it’s his wife he tells about their neighbor’s dinner – but because he wants to startle people further. In the speaker’s fantasy he’s not limited to looking strange. He can behave strangely as well, violating personal space in an intimate and obnoxious manner. Maybe that’s what’s most human of all about his wish to be “better” – not the wish itself, but that it’s rooted in being hurt, in wanting to deliver a comeuppance, and the belief that a different type of strangeness will liberate him.

Such a quirky poem deserves a quirky typeface. Not completely over the top – the temptation for a poem about tongues would be to choose something with extravagant ascenders and descenders – but still, something with a bit of a squiggle. Echelon’s legs – those parts of the lowercase k or uppercase R, for instance, that kick out and down from the main vertical stroke – show the necessary curves. And of course the title had to whip along the top of the page, but eccentric layout requires the typeface be classic, smoothly legible: Bodoni.