“From A Notebook” by James Merrill 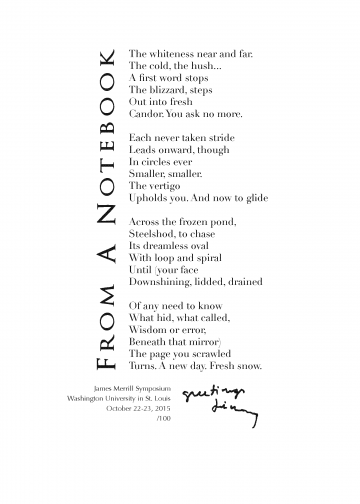 The late James Merrill was recognized as one of the leading poets of his generation. Praised for his stylish elegance, moral sensibilities, and transformation of autobiographical moments into deep and complex meditations, Merrill’s work spans genres—including plays and prose—but the bulk of his artistic expression can be found in his poetry. Merrill’s talent was recognized immediately, though his earliest work was seen as polished and technically proficient rather than deep. It was not until his themes became more dramatic and personal that he began to win serious attention and literary acclaim. Over the long course of his career, Merrill won nearly every major literary award in America: he received two National Book Awards, forNights and Days (1966) and Mirabell: Books of Numbers (1978); Merrill’s long Ouija-inspired epic poem The Changing Light at Sandover (1982) won the National Book Critics Circle Award, and he was awarded the inaugural Bobbitt National Prize for Poetry by the Library of Congress for his book The Inner Room (1988); he also received both the Bollingen Prize in Poetry and the Pulitzer Prize, the latter for a book of occult poetry called Divine Comedies (1976).  (Excerpted from the Poetry Foundation)

was chosen by Olin Library staff to commemorate the 2015 James Merrill Symposium hosted by the Modern Literature Collection at Washington University in St. Louis.