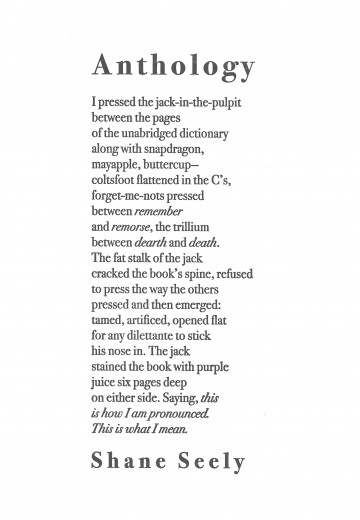 Shane Seely’s first book of poems, The Snowbound House, won the 2008 Philip Levine Prize for Poetry and was published by Anhinga Press in 2009. His work has recently appeared or is forthcoming in The Southern Review, The Florida Review, Cave Wall, and elsewhere. He lives and writes in St. Louis.

This poem’s simplicity is deceptive. It invites multiple interpretations, but a complex discussion must begin somewhere. One starting point is with our basic desire to learn, how it propels us out into the world, to see and touch everything, the better to know. Quickly that’s followed by the desire to catalog what we find, to give it structure, and in so doing, make meaning. But then the desire to collect, to possess, rears its head. There’s a line, the poet insists, and there are consequences when you cross it. There will always be those who refuse to come quietly, to fit neatly into our structure, who “refuse/ to press the way the others/ pressed” and are diminished when we force the issue. Seely lets the Jack speak last, where its insistence on self definition will reverberate into the silence just after the poem.

Giambattista Bodoni was a master typographer and printer of the 18th Century. Among the many typefaces he designed over the course of his life, this one bears his name and is the basis for an entire family of related typefaces. His Manuale tipografico compiles specimens of Roman, Greek and Cyrillic faces as well as a collection of printers’ ornaments and borders. His basic advice on typesetting still applies in the digital world. The poem’s concerns so closely parallel Bodoni’s that his typeface was the inevitable choice.