“An Instrument For Making A New Sound” by Dawn Robinson 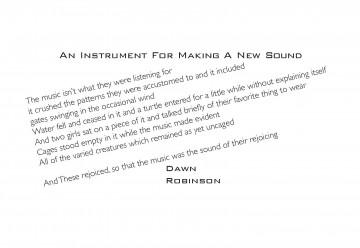 Dawn Robinson lives in California, and is lucky enough to work with creative writers of all ages. She has drawn inspiration from Albert Einstein’s reputed statement: “Logic will get you from A to B, imagination will take you anywhere.”

This poem is revelatory. It has the cadence and diction of prophecy and the same opaque quality to its images as the book of Revelation. Except it’s joyful. Instead of the apocalypse, there’s the music of everyday life, a thing so solid that “two girls sat on a piece of it and talked briefly of their favorite thing to wear” and so liberating that “Cages stood empty in it.” Sounds like “All of the varied creatures” are having a party—a revel—where the dancers make their own tune. What’s most hopeful, though, is how the music “crushed the patterns they were accustomed to and… included/ gates swinging in the occasional wind.” What was once closed has opened; old habits have changed. It’s possible. The poet has dreamed it, so we can begin to sing for ourselves.

A poem made of hints and mystery and rejoicing should feel light on the page. Gill Sans Light is the typographical equivalent of a tuning fork; its clarity makes it easy to read, even at an angle, while its uniform, thin strokes leave plenty of white space, even in a solid block of text. The longest lines break a little beyond the title, escaping the blocky border of Bank Gothic like music floating through an open window. It felt somehow right to make the poet’s name the fulcrum on which the poem’s body pivots out of line.