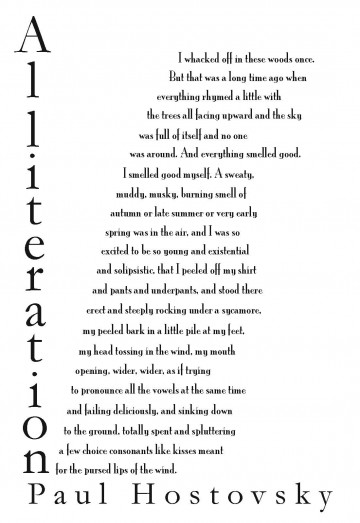 Paul Hostovsky is the author of five books of poetry and six poetry chapbooks. His Selected Poems was published by FutureCycle Press in 2014. He has been featured on Poetry Daily, Verse Daily, and The Writer’s Almanac, has won a Pushcart Prize and two Best of the Net Awards, and was a Featured Poet on the Georgia Poetry Circuit 2013. To read more of his work, visit him at www.paulhostovsky.com.

This speaker’s voice is truly ecstatic, attuned so finely to the liveliness of the surrounding woods that he’s compelled to join it. It doesn’t even matter which season it actually was (in fact it was probably all of them at one time or another). All that matters is the feeling of complete release, of surrendering to one’s body so fully that you abandon your clothes, your speech… all the trappings of civilization. The poet is careful to arrange his syntax to mirror the crescendo of climax, so that as the vowels and then the consonants make their appearances, we feel the arc as much as read it.

Everything about this poem is standing at attention so the typeface for the body needed something with exaggerated ascenders and descenders. Mona Lisa delivers, its effect on the page a wood of its own. Pealing the body of the poem away from the left margin is as much for the sycamore’s bark as it is for the speaker’s remembered erection. To frame it all, the title and poet’s name are tree and ground, respectively. Garamond keeps them from becoming too stylized, too unusual to be true.